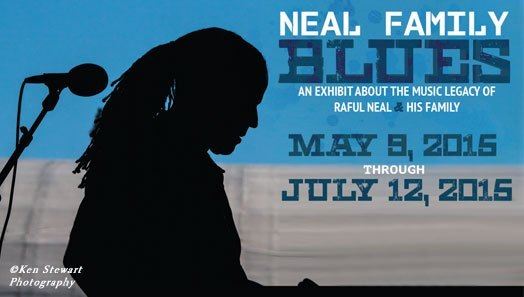 Beginning May 9th and running through July 12th the West Baton Rouge Museum will pay tribute to Raful Neal "Godfather of Baton Rouge Blues" and his talented family with the exhibition Neal Family Blues.

The Blues emerged in the Southern United States at the turn-of-the-century and numerous West Baton Rouge residents played a part. Rooted in African American field hollers, work songs, spirituals, and country string music, the blues captured the hardships of life in the Deep South. Juke joints, weekend parties, and picnics were the primary venue for blues musicians on acoustic guitar, piano, or harmonica until southern blues moved north to places like Chicago where they thrilled wider and wider audiences and inspired rhythm and blues and rock and roll.

Erwinville native Raful and his wife Shirley had 10 kids together; all of them musically inclined. While other local musicians found fame in the north, Raful remained in the Baton Rouge area to raise his family and contribute to the local music scene. Raful Neal, a member of the Blues Hall of Fame as well as the Louisiana Music Hall of Fame, played numerous juke joints and music halls across the region including 14 consecutive years at the New Orleans Jazz and Heritage Festival. Sons Kenny and Lil' Ray Neal have carried rural blues to the international stage, while grandsons Tyree, Chris, and BroBro carry the next generation into the hip-hop scene. The exhibit Neal Family Blues will feature a vintage jukebox playing Neal family albums, as well as instruments, photographs, and video on loan from the family. Kenny Neal Family and Friends Heritage Blues Festival will be held at the WBR Multi-Purpose Arena on June 6th in coordination with the exhibit.