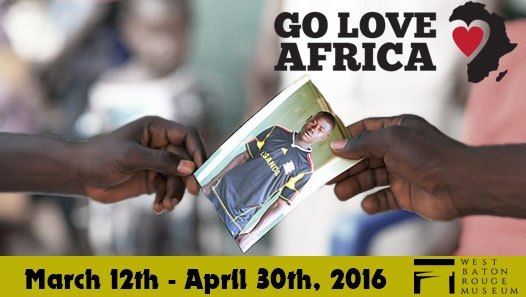 The exhibition, Go Love Africa: Portraits from Uganda and Madagascar will be on display at the West Baton Rouge Museum from March 12 through April 30, 2016. The exhibit at the West Baton Rouge Museum features the photography of Aaron Williams, former editor of the West Side Journal, and Nathan Dewberry who traveled to Uganda in 2014 and Madagascar in 2015. Go Love Africa is an organization set out to give people in remote villages in Africa the opportunity to own a photo of themselves - something so many lack. The photographers organized Go Love Africa project in 2013 with a mission to photograph everyday people and to provide their sitters with a portrait of themselves as a goodwill venture. The results include a portfolio of outstanding color portraits that capture emotions and beauty in faces of everyday people.

Have you ever considered how many pictures you have of yourself? Do they serve as official documents or perhaps as a sentimental record? Photographers Aaron Williams and Nathan Dewberry ask that question. In September 2014, the duo traveled to Uganda, Africa, for their first of many photography trips. Out in rural communities the photographers organized gatherings that have attracted hundreds of villagers who wait sometimes hours for the opportunity to have a photograph of themselves. Williams and Dewberry use state-of- the-art portable printers in order to instantly provide sitters with a photograph. Williams said, "We printed more than 1,200 photos in the remote villages of Nankoma, Bugiri and Buwini. Some villagers wanted a picture by themselves. Others wanted one with their family or friends. Many of the villagers live in huts made of mud, straw and any other material they could gather, and most live without electricity or running water."