In 1803, very few Americans lived in West Baton Rouge Parish. It was populated by various Native American tribes; Creoles, who descended from original French and Spanish settlers; Acadians, exiles from Canada; and African slaves. The livelihood of the original settlers varied from fur trappers, hunters, soldiers and farmers. Spanish land grants divided the farms into narrow strips of property, each with its own river frontage. Long before sugar cane became the staple crop that it is in West Baton Rouge, indigo was the area's primary crop. Today, the land is still divided the same way it was in early nineteenth century.

The earliest settlement in West Baton Rouge Parish was Brusly Landing, located 4 miles south of where you are presently standing. Dr. Michele Mahier developed the town of Sainte Michele early in the 1800's. Although today, Sainte Michele is entirely located under the waters of the Mississippi, it was the precursor of today's Town of Port Allen.

Where were you on April 30, 1803? On this day in our nation's history, Robert Livingston and James Monroe were busy closing the "Real Estate Deal of the Millennium!" For the amazing price of $15 million, President Thomas Jefferson overcame his initial apprehension about the Constitutional limits placed on the executive branch of government, authorizing his emissaries to purchase the entire Louisiana Territory from France. Imagine the amount of land - what the United States acquired covered an area larger than the European countries of Great Britain, France, Germany, Italy, Spain and Portugal combined!

Before Napoleon could change his mind, Jefferson, the cautious visionary, decided to take a risk in favor of his dreams of an "Empire of Liberty' that would expand the new Republic westward. Applauding Jefferson's boldness, General Horatio Gates wrote to the President later that summer, "Let the land rejoice, for you have bought Louisiana for a song."

Louisiana, as originally settled, was the land drained by the Mighty Mississippi and her tributaries, stretching over 800.000 square miles! Did you know 17 states resulted from this purchase? Did you know Yellowstone National Park was once part of Louisiana? Although his original motivation was to acquire the Port of New Orleans and it's associated trading rights, Thomas Jefferson soon realized his Louisiana Purchase would greatly benefit this newly formed sovereign nation. With this one purcha 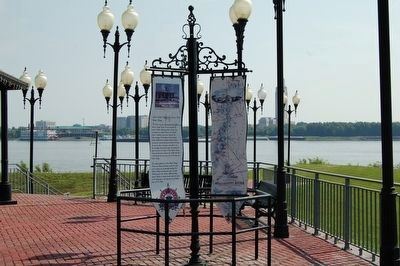 se, he had obtained a territory for a price calculated at about four cents an acre, whose natural resources amounted to riches far beyond anyone's wildest dreams! Mr. Jefferson withstood the criticism of his peers who feared the new Republic was growing too quickly and would be too vast to govern properly. He wrote:

However our interests may restrain us within our own limits, it is impossible not too look forward to distant times, when our rapid multiplication will expand itself beyond those limits and cover the whole northern, if not southern, continent, when a people speaking the same language, governed in similar forms and similar laws..."

President Thomas Jefferson sent an expedition westward to find and map a transcontinental water route to the Pacific Ocean. With approval from Congress, Captain Meriwether Lewis and William Clark embarked on their legendary 3-year journey from St. Charles, Missouri to explore the uncharted West. Their expedition included 33 party members, known as the Corps of Discovery.