There are roughly 3000 different species of mosquitoes worldwide, 68 of those species are found in Louisiana. Thankfully, only a few mosquito species are considered medically important and cause problems for humans on a regular basis. The following is a shortlist of the most common mosquito species that are medically important and cause nuisance problems in our area. This by no means includes all of the species that are present here in West Baton Rouge, just the most common species we deal with on a daily basis and that you are most likely to find around your home.

Throughout the description of various mosquito species below, you will often see abbreviated references to specific diseases such as:

For complete information on each disease please check out our section on mosquito-borne diseases or visit the American Mosquito Control Association's article on Mosquito-Borne Diseases. 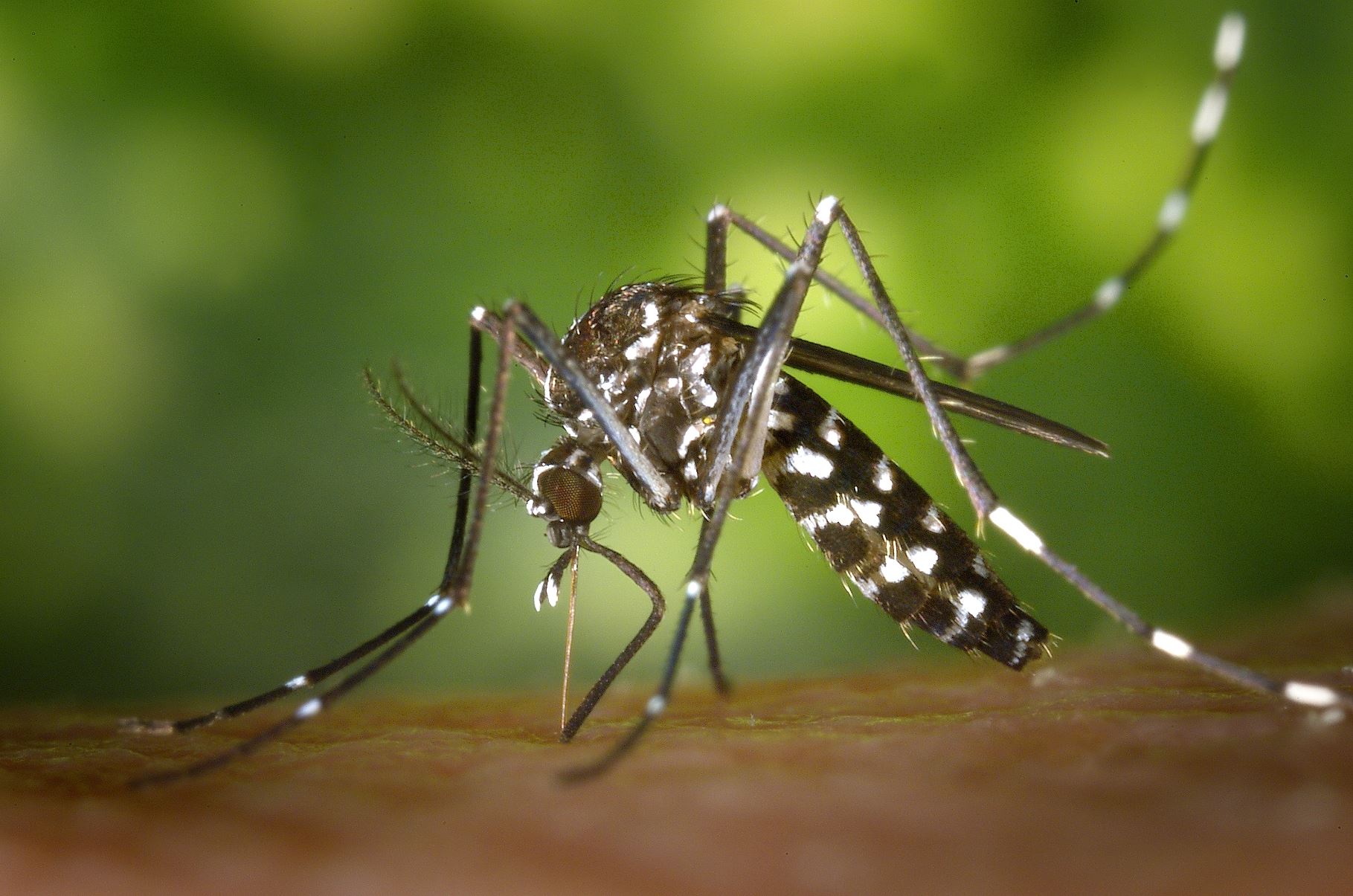 Aedes Albopictus, better known as the "Asian Tiger Mosquito" has become increasingly common in West Baton Rouge, mostly around the home. Most of the time when people call in and say they are getting bit by these "tiny black and white striped mosquitoes" this is the species to blame. Aedes Albopictus primarily is a container breeder and likes to live around your home, which means you'll find them breeding in things like:

The Asian Tiger Mosquito has a very short flight range (less than several hundred feet) which means if you are having a problem with these mosquitoes, they are likely breeding around your home or a neighbors house nearby. This mosquito is a potential vector of West Nile Virus, Saint Louis Encephalitis, Eastern Equine Encephalitis, and Zika Virus. Aedes Albopictus also is a capable vector of Dengue Fever, Yellow Fever, and Dog Heart Worm.

You the public can play a major role in the control of this mosquito, probably more so than with any other species. By making sure that:

Culex Quinquefasciatus, also known as the "Southern House Mosquito" is very common in Louisiana and in WBR Parish. Culex Quinquefasciatus is the primary vector of West Nile Virus, St. Louis Encephalitis, and dog heartworm in Louisiana. Because of this, the bulk of our surveillance, disease testing, and spray programs are targeted towards the control of this species. This species is prevalent around human population centers and you will find them breeding in areas such as:

When we are out Ultra Low Volume spraying by truck at night or spraying larvicide into roadside ditches during the day, this is usually the species we are targeting. It is known as the "Southern House Mosquito" because of its habit of coming into homes at night. Things like broken window/door screens and poor sealing around window air condition units can allow this species an entrance into the home. 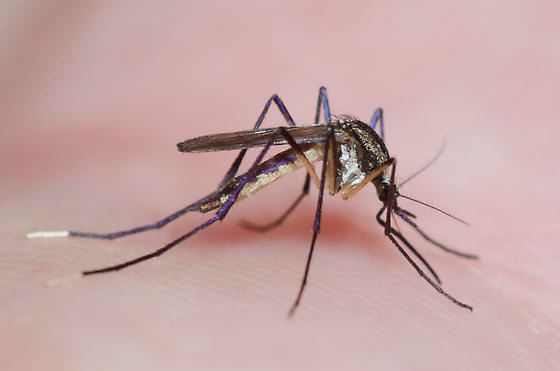 Psorophora Ferox better known as the "Woodland Mosquito" is very common in the wooded areas of West Baton Rouge Parish. This mosquito is very recognizable with its white-tipped legs and brilliant blue-purple scales. This mosquito can be a real pest for homeowners who build on partially cleared woodland lots, and also for hunters who venture into the wooded areas of West Baton Rouge. It is considered to be a potential vector of West Nile Virus. This species is very active during the day and their feeding often targets the upper body of their host, for this, they are often referred to as the headhunter mosquito.

During times of extreme flooding, such as the aftermath of hurricanes and tropical storm events, the numbers of this species can increase to the point where they begin to leave the wooded areas of the parish and move into the surrounding populated areas. Soon after we are often inundated with complaint calls due to the ferocious biting nature of this species. 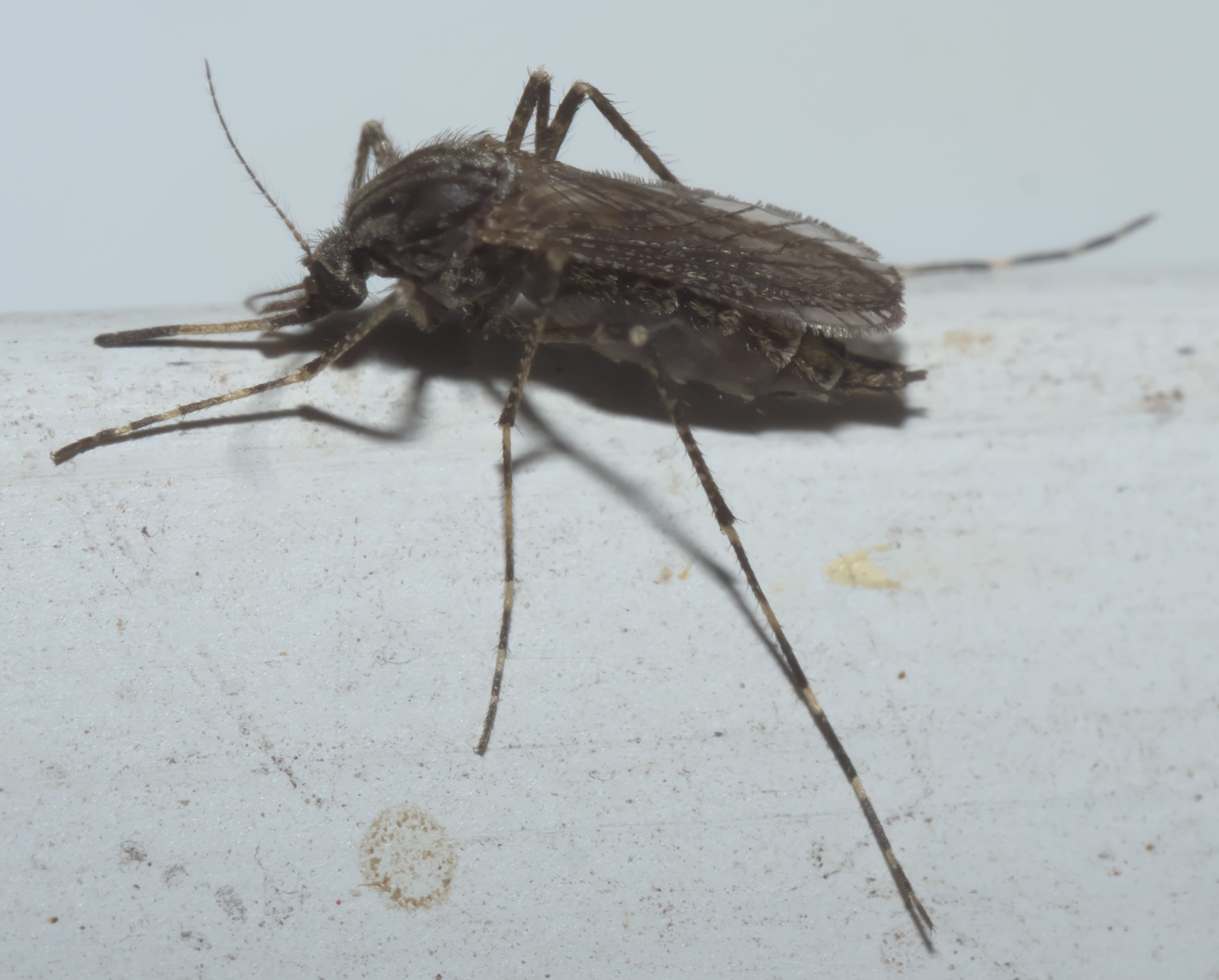 Psorophora Columbiae also known as the "Dark Rice Field Mosquito" is common in West Baton Rouge Parish, especially in the aftermath of hurricane/tropical storm events. The females of this large dark species are fierce biters, attacking anytime day or night. In cases of extreme numbers, they can kill livestock and make it virtually impossible for people to be outdoors.

Psorophora Columbiae are strong flyers with an estimated flight range of ten miles or more. This species is a potential vector of West Nile Virus and an efficient vector of Venezuelan Equine Encephalitis. 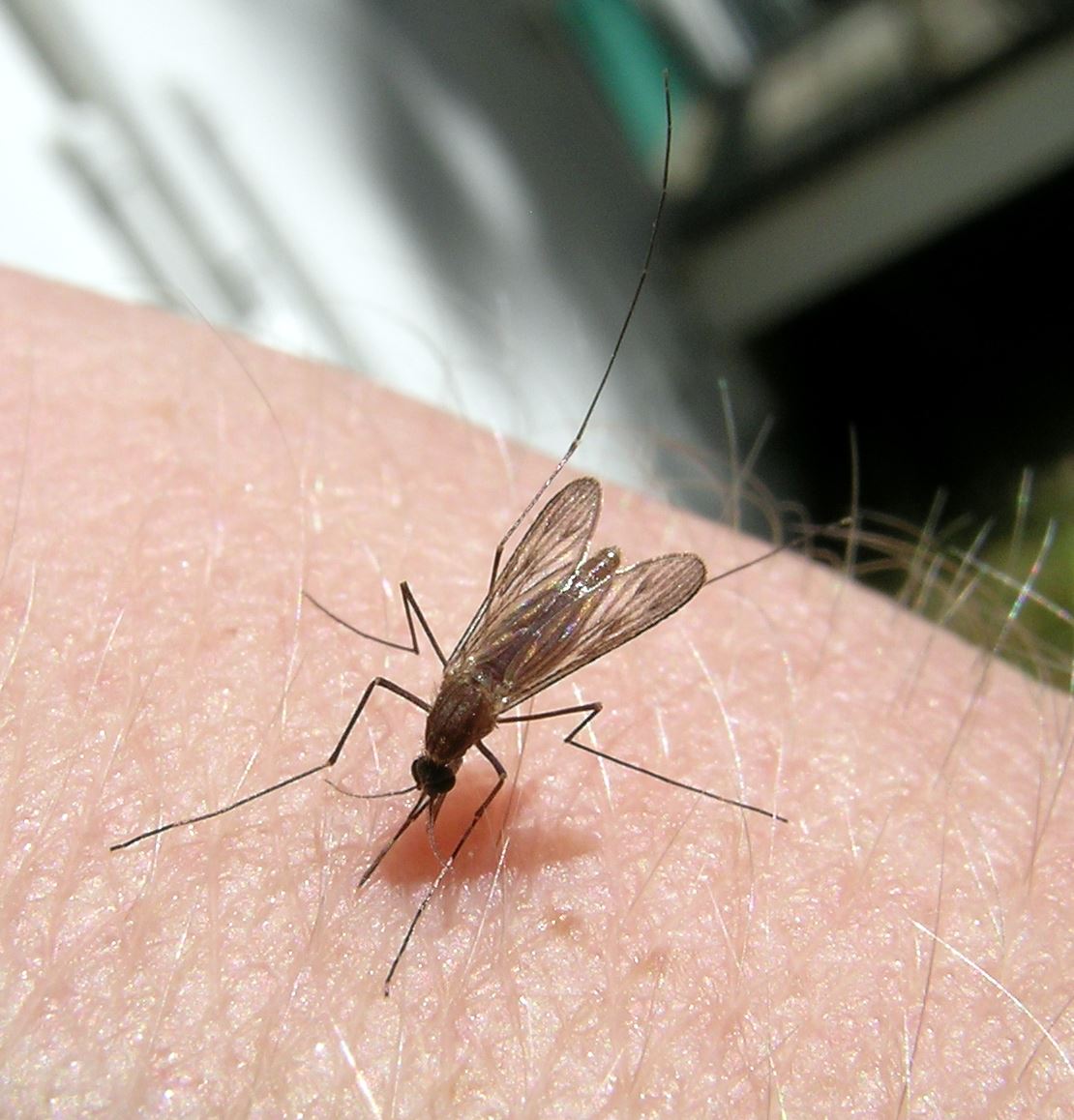 Anopheles Quadrimaculatus better known as the "Malaria Mosquito" is fairly common in West Baton Rouge Parish. This species is the principal vector of Malaria east of the Rocky Mountains. It is also a vector of West Nile Virus and dog heart-worm. This mosquito's habitats of choice include swamps and marshes, lake margins, rice fields, and slow-moving streams. Anopheles Quadrimaculatus is a large brown colored species with dark spots on each wing. 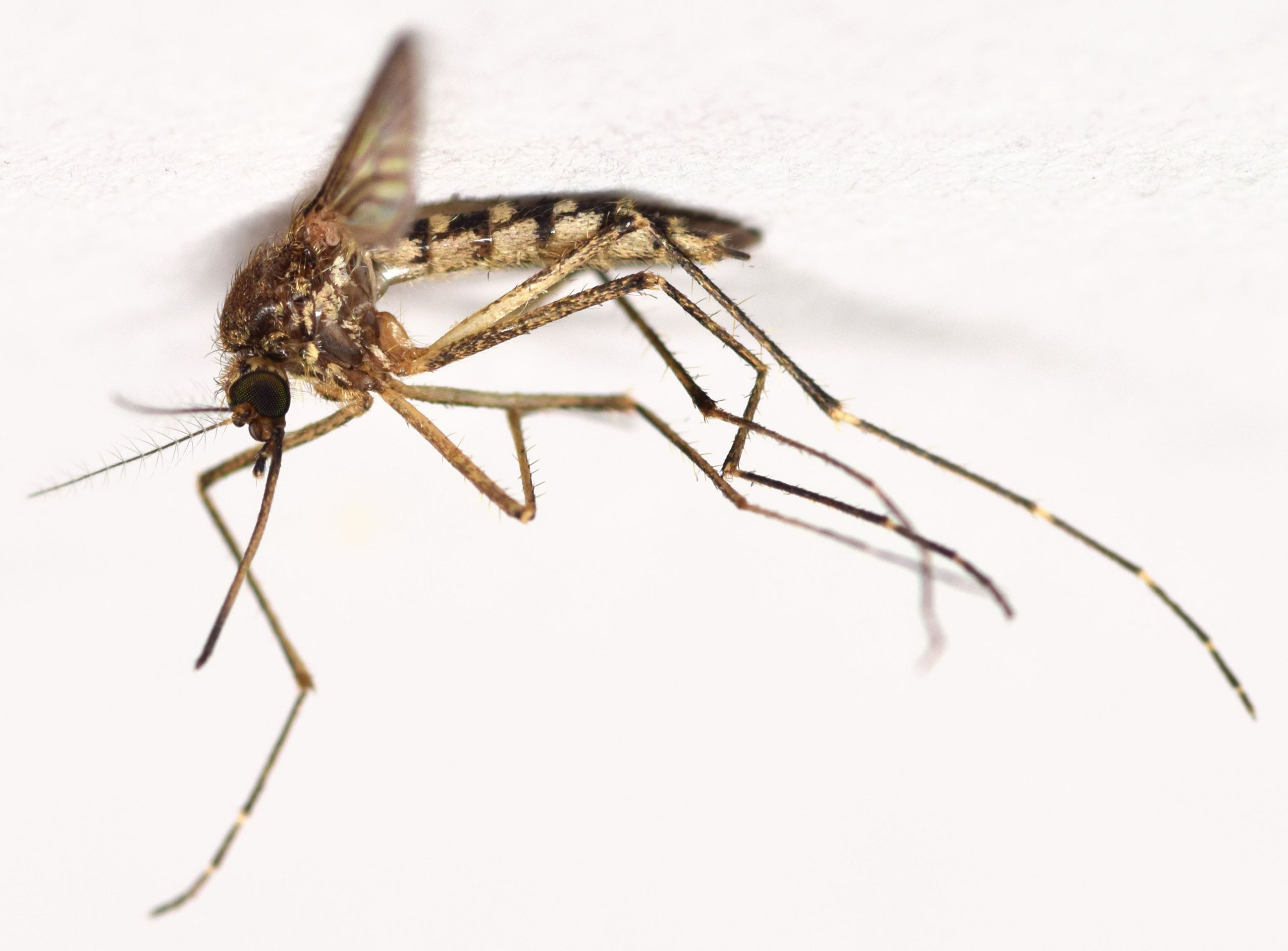 Aedes Vexans also know as the "Inland Floodwater Mosquito" is very common in West Baton Rouge Parish especially after periods of heavy rain and flooding, such as the aftermath of hurricane/tropical storm force events. This species will breed in very high numbers and has a flight range of 5 to 10 miles, with a favorable wind they can even travel 20 to 40 miles.

Flight Range Makes This Species Difficult To Control at Times

Because of their flight range, this species is hard to control by truck spraying. With this species present, we often get calls from residents after a night of Ultra Low Volume truck spraying claiming that mosquito populations are worse than they were previous to spraying. In this case, a fresh wave of mosquitoes could have come in from anywhere 5 to 40 miles away (such as the swampy areas on Rosedale Road) and replaced the mosquito population that was killed the previous night. This species is known to cause a painful bite and is a potential vector of: